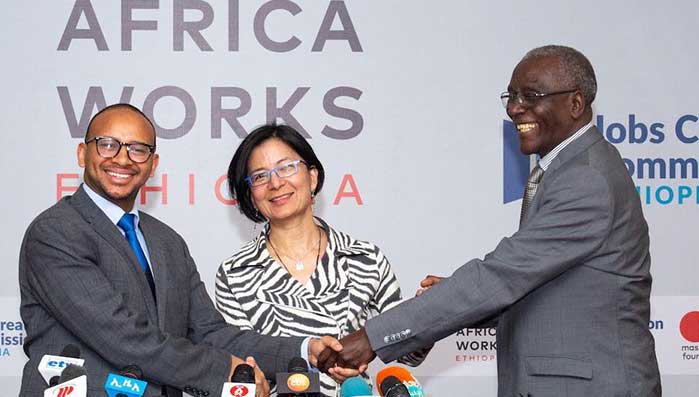 At the Job Creation Summit, held on October 31, 2019, at the Sheraton Addis Hotel, Ephrem Tekle Lemango (PhD) acknowledged that it is not the public sector, but the private one, that is currently the largest employer despite a high level of investment by the government. Public sector investment currently stands at around a fifth of the economy.

During the Summit, the Commission unveiled a new job creation plan aimed at creating 20 million jobs within a decade. This includes three million jobs to be created this year to tackle the growing challenges of unemployment in a country where two million new people are entering the labour market every year.

“We aren't incentivising them but consoling them,” said Ephrem of the government's past initiatives at job creation.

There is not complete agreement, however, on the government's track record of job creation among government officials. While Mikyas Mulugeta, vice head of the Addis Abeba Job Creation & Enterprise Development Bureau, agrees with the assessment that the previous strategy was not successful in meeting the growing challenges of unemployment at the national level, he does not believe that it was a complete failure.

"It has been able to create thousands of jobs in the capital alone," he said, adding that about four percent of the jobs created have graduated to the medium enterprise category with a registered capital of over 1.5 million Br, more than the two percent target.

The Commission’s plan highlights the active involvement of the private sector and the expansion of technology-based innovations to address the growing challenges of unemployment in the country. It is also collaborating with the Ministry of Labour & Social Affairs to address coordination problems among different organs of the government dealing with urban and rural unemployment challenges.

As part of the plan, the government signed a partnership agreement with Mastercard Foundation, launching a programme committed to creating 10 million jobs in the country over the coming decade.

The programme gives special attention to Ethiopia, making it the largest recipient among the seven African countries that share the 30 million job creation target the Foundation plans to achieve by 2030. The Foundation has committed an initial 300 million dollars to the programme in Ethiopia, which intends to create 1.4 million jobs in the first phase.

Ethiopia’s large population, rapid economic development and ongoing economic reforms were the primary reasons for the country receiving the highest share of the investment, according to Reeta Roy, founding President and CEO of Mastercard Foundation, which has committed around 2.2 billion dollars and claims to have improved the lives of 33.8 million people around the world.

The programme focuses on providing access to finance, business development support and skills development to young people. Tourism, agriculture, manufacturing and ICT were identified as sectors that required investment.

“Selection of the beneficiaries will be carried out by working with organizations having expertise in those areas,” said Reeta.

The Foundation has already had previous experience working with partners in the country to advance financial inclusion, education and youth livelihoods, having allocated more than 62 million dollars since 2009, according to Alemayehu Konde, the Foundation's country head in Ethiopia.

In 2018, the unemployment rate in the country stood at around 19pc, up from 17pc from two years back. Earlier this year, Finance Minister Ahmed Shide highlighted a recent survey that showed a decline in urban unemployment contrary to the trend in the overall unemployment rate.

While the service and hospitality sectors were found to be the biggest job creators, the Finance Ministry discovered the need to raise agricultural productivity to create value chains for decent-paying jobs.

Experts appreciated the government’s initiative to involve the private sector in a higher role.

“Government cannot do everything right now. If that is the approach, I think we will have an amazing result,” said Eleni Gabre-Madhin (PhD), chief happiness officer at BlueMoon and a former CEO of the Ethiopian Commodity Exchange.

She also said that while the language used in the plan shows it is going to be private sector-led, the details were not elaborated on.

“There is a need to distinguish between the small traditional sector of micro-enterprises development and startup businesses with new ideas that have a high potential for growth and innovation,” she added.

Gov't Service Digitisation Not Just About Gadgets but Attitude