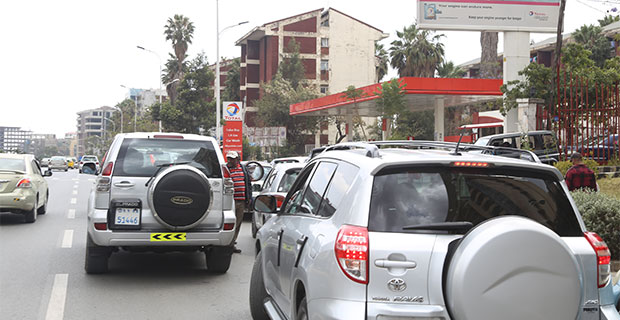 Cars queue up at a gas station found on bole road to fill their tank.

Muluken Solomon, a businessman in his mid-40s, had to miss work early last Tuesday morning. This was a necessary sacrifice to fill his car with gasoline.

He visited four fuel stations in a row and was told at each stop that they had run out of gasoline. On his fifth trip to NOC gas station in Bole District, an area commonly known as Bole Bras, Muluken was relieved to fill up his empty gas tank after a 15-minute wait.

“This shortage is really stressful and inconvenient,” says Muluken. “It has been a source of frustration in my professional and personal life.”

But the staff and management at the fuel stations do not believe that there is a gas shortage in the city.

“There is no fuel shortage here,” says Eyob Tadesse, an attendant at the NOC station but also acknowledges that he cannot speak for other gas stations.

There is a similar sentiment at another of NOC’s gas stations where Muluken had tried to get gasoline in Haya Hulet, close to Lem Hotel, that day. The station’s management claim that they had just finished their stock and were waiting to be supplied a refill.

Another driver dealing with recent shortages is Dawit Yibeltal. His experience is a little different than Muluken's in that given the apparent shortages of fuel just two weeks ago, when he waited nearly two hours to fill his vehicle, things have improved recently.

“The situation is better now but I still can’t say there is no shortage,” said Dawit. “It used to take me no more than three minutes to fill my car.”

Sources close to the fuel supply chain claim the problem is due to grievances raised by oil transporters over low government-set tariffs.

The Ethiopian Bulk Fuel Transport Owner’s Association, with around 3,000 tanker trucks registered under its umbrella, has been arguing that the tariffs for fuel transportation in the country are too low and that their business has been hurt.

These tariffs are set by the Ministry of Trade & Industry and are settled after discussions are held between the Ministry of Transport and representatives of the oil transporters. The deliberations take into account factors such as the price of oil, salaries of drivers, bank and insurance interest rates, types of road, distance of transportation and the amount of fuel a tanker truck can carry. Currently, the oil transporters want the tariffs raised by an average of 20pc.

The fuel transporters come into the scene after the Ethiopian Petroleum Supply Enterprise buys fuel from international suppliers such as the Sudan Petroleum Corporation, Saudi Aramco and KPG from Kuwait and sells it to the 26 oil distributors in the country. The ratio is determined according to the distributors' market share and the number of gas stations.

The distributors have their own tanker trucks to transport the fuel products to their stations all over Ethiopia. However, they contract out the bulk of the fuel that needs to be delivered to individual oil transporters and companies. The current profit margin for these transporters was set three-and-a-half years ago.

“In the years that followed, the price of oil has not increased, and other factors such as the price of spare parts, salaries for drivers and the price of motor insurance premiums have risen significantly,” said Tsega Asamere, chairperson of the Association.

“The tariff set for the oil transporters has remained the same, causing us to incur losses,” said Tsega. “There have been many attempts to address the issue through discussions, but to no avail.”

The Association has been trying to get the tariff adjustments for about three years. Just about a year ago, they also submitted a letter to the Office of the Prime Minister requesting an adjustment. This was processed and transferred to the Finance Ministry.

“The Ministry failed to hear our grievance,” said Tsega.

The Association, in a press release on October 06, 2018, expressed its grievance, warning that they might be forced to call a strike if their questions were not addressed.

In the weeks that followed, the tariffs did not change, and the city witnessed queues at fuel stations. Despite the Association’s warning though, it stresses that it called no strikes at the time.

“Some transporters though have stopped engaging in the business because of the high costs they are continuing to incur,” Tsega says.

The Association submitted another letter to the Prime Minister’s Office on October 22, 2018, stating that the Finance Ministry had failed to address their case. The letter also states that unless a tariff adjustment is made, transporters cannot continue to work under the prevailing conditions.

Serkalem G.Kirstos (PhD), former manager of Dalol Oil, believes the grievance of the oil transporters is indeed justified but disagrees with the manner with which they are trying to get their grievances addressed.

“Tariff adjustments should be linear and must be revised periodically,” he says. “Since the current tariff was set, many factors have changed that affect the transporters profit margin; the Ministry should revise the plan.”

The Petroleum Supply Enterprise, which has been delivering an average of 1.73 million liters of fuel to tanker trucks each day over the last three months, has been similarly worried on how the issue should be addressed.

“It may be the consumer, or the public at large, that ends up footing the bill of the tariff adjustments,” Tadesse Hailemariam, CEO of the Ethiopian Petroleum Supply Enterprise, said.

The Enterprise's supply of fuel has been growing at a rate of about 10pc every year and reached 4.5 billion litre valued at 59.9 billion Br last year.

An expert and lecturer of labour law at Addis Abeba University believes that the laws to call a strike are restrictive.

“Those who seek relief should take their case to court whenever possible. 10 days of notice should be given to the government or related authority, and the effect of the strike on third parties should always be considered,” says Mehari Redae (PhD).

The oil transporters will hold a meeting next week to deliberate on the strike.

While the Finance Ministry has acknowledged receiving the letter from the Transport Association and is aware of the ultimatum to strike, it declined to comment on the issue.

With Gov't Intervention, Supply Chains Can Survive the Virus