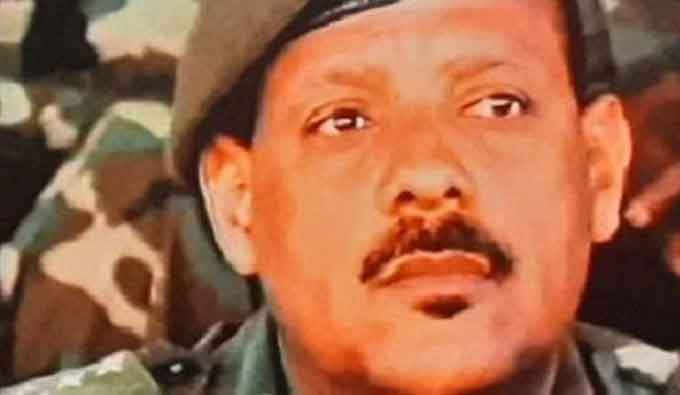 Ge’zae was born in Axum in 1961. He is survived by his wife Abeba Zemichael and his five children.

Last Genna (Ethiopian Christmas), a documentary depicting the lives of six families was screened by Demtsi Woyane Television. The families  all lost children during the armed struggle with the Dergue. The documentary showed how these families are struggling to make ends meet now, wondering what might have been if they had their children to look after them.

After the show aired, the journalist who made the documentary got a call from a man who was touched by the story and wanted to help the families. When a sequel documentary aired during the next festivity, Fasika(Easter), the lives of the families had been transformed and their houses fixed. They were seen thanking their benefactor. However, the benefactor remained anonymous. This man was Ge’zae Abera (Maj. Gen).

He did not seek the limelight and preferred to work behind the scenes.

“Ge’zae was a humble man that went out of his way to help others, said Dagim, his youngest son. He was very close to his five children. “He was caring and always made time for us and all the people around him.”

His colleagues knew the other side of Ge’zae. They recall a well-organised soldier and a logistics man. Tsadkan Gebretensae  (Lt Gen), former Chief of Staff of the armed forces, had fought many battles side by side with him.

“I always felt more comfortable in battle when I knew Ge’zae was in charge of the logistics,” he said.

Ge’zae was a man that he always counted on, and he always delivered. The most significant military achievement of the man he had known for 35 years was during the war with Eritrea.

“Ge’zae was able to mobilise 30,000 soldiers, 750 vehicles, tanks and heavy artillery within 12 hours for the surprise attack,” he recalls.

That element of surprise was a decisive battle that enabled the Ethiopian army to break through Eritrean trenches and swing the balance of power in the war to the Ethiopian side.

“I knew him well both on the battlefield and during peace times. He was a well-managed and organised person who was just naturally talented,” Tsadkan added.

Those who knew him best say that what was unique about him was the fact that he was able to reconcile these two sides of his personality: a soldier and a philanthropist.

“The war has hardened most of us tagayes(freedom fighters),” said Ataklti Teklu, a friend since childhood, “but Ge’zae was very different.”

He joined the TPLF and started the struggle as a foot soldier in 1977. He quickly rose through the ranks with increasing levels of responsible positions, culminating as head of logistics. He played a crucial role in shaping the Front’s military strategy and structure that ultimately proved successful.

When the national forces were reorganised, he was appointed head of logistics. He served in that position for twenty years, making a meaningful contribution in modernising logistics operations and giving distinguished support to peacekeeping operations.

Even though he officially retired in 2013, he never stopped working. He continued to serve in advisory positions where his logistics expertise was sought after. He consulted the government in its logistics modernisation projects with the Maritime Affairs Authority and helped organise the Public Service Employees Transport Enterprise. He was also a special advisor to the army.

It was indeed his desire to help in that capacity that led him to be with Se’are Mekonnen (Gen) to consult him during the country’s time of need that fateful night when they were both shot dead.

His sister, Mimi Nega, remembers telling him it was time for him to really retire and rest in a phone conversation only two days before he was gunned down. But he said to her that he could not abandon his duties, and he lived to serve his nation.

“Even after all the years of serving his nation, he still wanted to give more,” she said. “He was taken away when it was finally his time to enjoy the fruits of his labour.”

His family told Fortunehe dreamt of Ethiopia having a modern military force. After his retirement, he was always thinking and working on plans and formulated theories on ways the country can transform its armed forces.

Reading was his favourite past time, and he was insistent that the inheritance he can pass on to his children was education. Ge’zae always told his children he preferred to leave them the knowledge to build a house than the building itself. Leading by example, he earned degrees in logistics management from universities in the United States and the United Kingdom.

The family believes the only way they can get closure, if that is at all possible, is through continuing the various charitable works and projects their father had lined up.

“Though the man we dearly loved was taken away from us unexpectedly, his legacy will live through us,” they said.

Ge’zae was born in Axum in 1961. He is survived by his wife Abeba Zemichael and his five children.

Global Inflation’s Coming: The Good and the Ugly

Times May be Hard but Fear, Resignation Does No Good

The Rare Piece of Good News

No Good Comes from Profiling Individuals

Funerals: The Good, the Bad and the Fake
Share this...