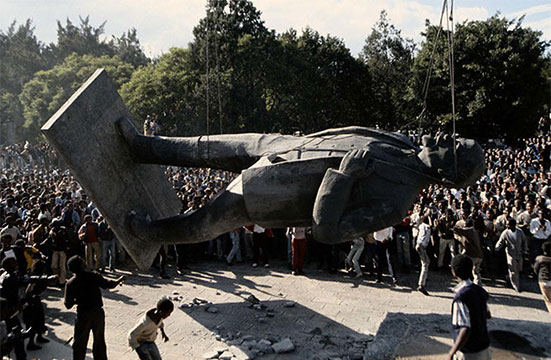 The 20tn statue of Vladimir Lenin was dismantled from the area located in front of the office of the Economic Commission of Africa in 1991.

The maintenance centre of the city's Roads Authority is moving to a new location in order to make room for the La Gare Eagle Hills Project, a sprawling residential and commercial development that eventually cover the site.

Occupying close to 3,000Sqm of land in Qirqos District around Meskel Flower Square, the garage will be moving to a new designated plot that rests on 16,500Sqm in Aqaqi Qality District.

The Addis Abeba Roads Authority secured the alternative land from the City Administration four years ago. The garage supplies maintenance and fuel services to the Authority's stock of vehicles. It also fuels vehicles of the Federal Ethics & Anti-corruption Commission and Ethiopian Institution of the Ombudsman.

Even though the Authority secured the alternative plot four years ago, it did not vacate then, since the relocation of farmers in the aria was delayed, according to Tieumay Woldegebriel, director of communications at the Authority.

"The farmers refused to move, saying the compensation the government paid them was very low," said Tieumay. "The Authority started a process of negotiation with the farmers."

Now a committee has already been formed to facilitate the relocation process, according to Tieumay.

The area will be used as a residential place for contractors working on the city's mega projects. The 50-billion-Br project will be jointly developed by the City Administration and the Abu Dhabi-based private real estate company, Eagle Hills. The project encompasses three hotels, 4,000 apartments, a mall and entertainment centres on a 36ha plot of land.

Though the Authority is going to evacuate from the area within the coming three months, officials do not have a clue where to place of Vladimir Lenin statue that is currently stored inside the premises of the garage. The statue was brought to the premises of the Authority in 1991 after it was removed from its location in front of the office of the Economic Commission of Africa.

The 20tn bronze monument was erected during the Dergueregime by Ethiopian and Cuban artists at a cost of 40,000 Br. The monument was built and financed by North Korea.

The statue was made to commemorate Vladimir Lenin, the Russian revolutionary, politician, political theorist, founder of Russia’s Communist Party and premier of the Soviet Union, who died in 1924.

After the statue was removed from the location just behind Saint Stephen's Church, the city erected it where it now stands before the establishment of the garage. The area where the statue was placed has now been developed into a well-tended park under the aegis of the Addis Abeba City Administration.

Tieumay says that the Authority does not have a mandate in managing the statue, saying that the monument arrived before the Authority moved into the place.

"Therefore, we will move to the new place and leave the monument behind," he told Fortune.

Many visitors have been paying visits to it, according to a source close to the case.

Apart from the statue, there are many heavy trucks and machinery inside the garage that are making the move difficult, according to the same source.

The Addis Abeba Culture & Tourism Bureau is not willing to receive the monument, stating that it is not registered in the heritage documents.

"We are only responsible for the heritages that are registered from 1998 up until now," Siyoum Temesgen, deputy head of the Bureau, told Fortune.

Kassaye Begashaw, a lecturer in the archaeology & heritage management department at Addis Abeba University, recommends the Tourism Bureau take the statue, adding that it was never owned by the Roads Authority in the first place.

Ethiopian history has gone through many positive and negative happenings, according to Kassaye.

"But all of the histories and heritages should be preserved," he said.

Short Contract Farming Window Closes, Leaves Many in the Dark

Social Research into Urbanites Leaves Much to be Desired