Eritrea Eyes Regional Integration on the Heels of Rapprochement 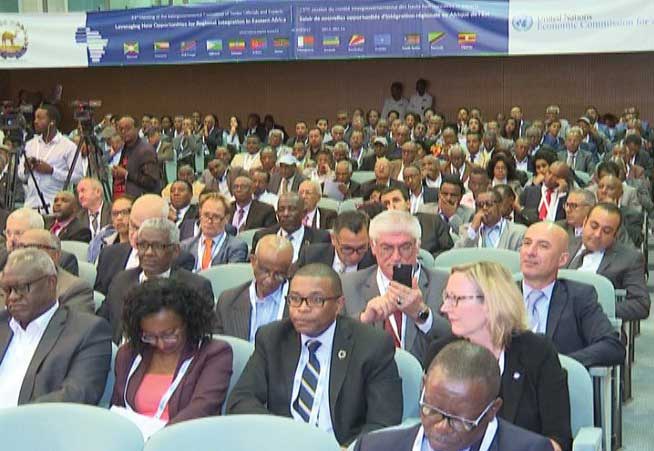 After more than a decade of isolation, Eritrea hosted a high-level regional summit in early November to discuss regional economic integration.

Eritrea has recently been in the spotlight with renewed optimism among the international community on its expected role in strengthening regional integration. Long viewed as a reclusive nation, shuttle diplomacy is in a pilot stage through the promotion of its potential for economic development along its coastline bordering the Red Sea.

The East African nation hosted the 23rd meeting of the Intergovernmental Committee of Senior Officials & Experts (ICSOE) in early November in Asmera. Jointly organised with the United Nations Economic Commission for Africa (ECA), the theme was “Leveraging New Opportunities for Regional Integration in Eastern Africa.”

The meeting was attended by the delegations of 10 African countries, including the host nation, as well as regional and international organisations.

The role of regional economic communities in the acceleration of the African Continental Free Trade Area (AfCFTA) and the opportunities presented by shared water resources in regional integration was highlighted at the meeting.

Lack of structural transformation and weak trade performance of the Eastern Africa region and the slow rate of job creation were highlighted among the major constraints to economic integration.

Eritrean delegates that were a party to the meeting, though positive about the possibility for regional integration, were on the fence about its practicality.

Representatives of the nations recommended mobilising resources from the private and public sectors to ensure infrastructure development that can ensure smooth regional integration. Participants also agreed that the ratification of the African Union’s Protocol on the Free Movement of People, financing policies to alleviate social tensions and to develop social safety nets could go a long way in ensuring the economic competitiveness of the region.

Eritrea’s interest in regional integration relied mainly on the "blue economy," those sectors that rely on the ocean such as beach tourism, fishing, aquaculture and offshore mining. As a result, a side event was also held on “Harnessing the Blue Economy for Regional Integration.”

Experiences from Seychelles, Comoros and Madagascar were presented, and Eritrea’s potential for fisheries and deep-sea mining were highlighted. This was despite Eritrea remaining at the bottom of African country rankings in terms of import and export trade volumes in fish and fish products, according to the Food & Agricultural Organization (FAO).

The level of integration among East African countries varies according to the economic blocks in the region, with the East African Community (EAC) taking the clear lead by having already ratified a monetary union. Eritrea, like its neighbours Ethiopia, Sudan and Djibouti, was ranked very low in the African Regional Integration Index of 2018.

The service sector, with an average of 59pc of GDP in the Horn region, dominates the regional economy, followed by agriculture, which accounted for 25.7pc on average. Industry, including construction, is not more than 15pc of the GDP, with manufacturing exports standing at 14.6pc, according to the East Africa Economic Outlook of 2019.

While intraregional trade in East Africa stood at around eight percent in 2017, the continental average stood at 15.5pc.

Earlier this decade, the African Union introduced the AfCTA intending to create a continental trading area by 2017 that aims to create a market of 1.2 billion people and create 800,000 to two million job opportunities.

Eritrea was not a party to the initial negotiations on the AfCTA and has now neither signed on to the trading area nor agreed to the Kigali Declaration. The nation’s rapprochement with Ethiopia in 2018, ending the two countries’ decades-long cold war, was believed by observers to signal the end of Eritrea's isolationism.

The country, which has a gross domestic product (GDP) of around eight billion dollars and a population estimated at 3.5 million, has remained politically and economically closed following the souring of diplomatic relations with Ethiopia in the late 1990s.

Dereje Zeleke (PhD), associate professor of law at Addis Abeba University, stresses the importance of internal security and stability within the individual nations in the region to realise such a high-level objective of regional integration.

“Even though the improved relations between Ethiopia and Eritrea is a significant step forward to advance regional integration, internal stability of each nation is the most important factor in establishing a successful economic and political integration among the nations in the region,” he said.

Who it is that midwifed the rapprochement between Ethiopia and Eritrea...

Regional Enterprise to Build Dam for 1.5b Br

Survival and overcoming challenges in life very often translate to early mornings and late nights behind the wheel for t...

History is a bath of blood, writes William James, the American philosopher known to b...

Abiy Ahmed (PhD) almost lost his life while posted as a radio operator in the late 1...

Kemise Wereda suddenly grew dark in the middle of the day last month. The sun could barely be seen anymore. On most other years, this would...

Time to Jump on the Circular Economy Bandwagon

The present "linear" economy operates by taking, using and disposing of raw materials...

The Novel Coronavirus (COVID-19) continues to have a devastating impact on public hea...

Armed conflict is raging on Ethiopia’s northern front. On the economic front, busin...

History is a bath of blood, writes William James, the American philosopher known to b...

Abiy Ahmed (PhD) almost lost his life while posted as a radio operator in the late 1...

It is our sad reality that every generation in Ethiopia sees armed conflict, however...

Words are potent, and it is in the use of language that narratives of our politics ar...

Only Human to Worry

Sometimes, it is possible to wonder what a life free of worries would be like – aday where we go about our business, enjoy each moment, ta...

He was married with two children. At the time of his death, his wife and kids were at their grandmother's...