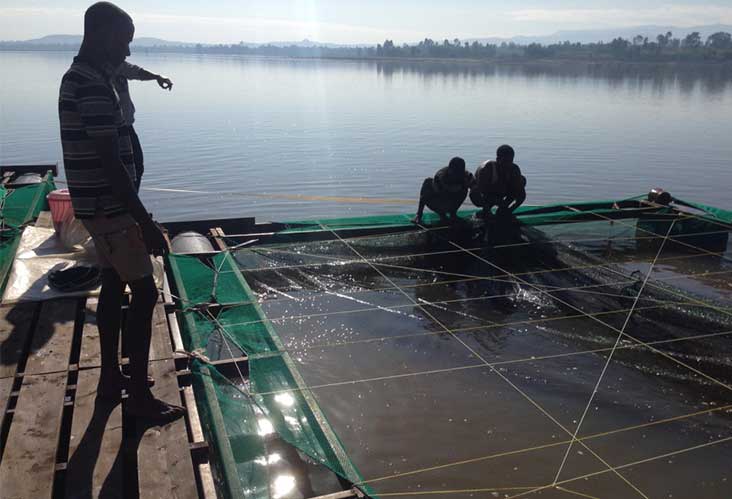 Fishermen were on duty to harvest small fish at a fish farming project at Qoga Dam, Bahir Dar. This project is similar to the project at Gilgel Gibe III Dam.

Africa Sustainable Aquaculture (ASA), a Dutch investment company in the food and water business, has initiated a feasibility study to invest in aquaculture at Gilgel Gibe III Dam.

This will be a second project for the company, and it will cover 21,000Sqm of water surface area of the dam with fish farming infrastructure. The company plans to offer 50 to 100 job opportunities for tilapia fish farming.

Five years ago, the company invested 600,000 Br for a feasibility, design and business plan for a fish farming project in Qoga Dam, Bahir Dar, Amhara Regional State. The company invested 60 million Br in 2015 by hiring 50 people, the Dutch embassy covered 40pc of the cost. The company harvested five million Tilapia fish, a freshwater fish that feeds on algae, in one year. It currently supplies five tonnes of fish a week to different supermarkets, hotels and distributors.

The new project will benefit local fishermen by equipping them with modern methods of fishing, according to Alwin Quispel, general manager of the company.

Though the country is believed to be endowed with ample resources of fish, it is hampered by degradation to its water bodies caused by toxic wastewater discharge.

With the potential of producing 94,500tn of fish a year, Ethiopia currently only produces 56,133tn of fish, just 59.4pc of the potential. The volume showed a decline of 9.5pc from the previous year. Kenya’s fish production from freshwater sources stood at almost double that of size in Ethiopia in 2017.

"The sector scores very low compared to the productivity of other agricultural sectors," said Dereje.

A total of 25,000 traditional fishermen operate in the country. The Amhara Regional State holds a significant share of fish production in the nation, harvesting 22,360tn of fish in the last fiscal year, 17,000tn of which was produced at Lake Tana.

The total water area of the lakes and reservoirs of Ethiopia stands at around 7,400 square kilometres, while rivers stretch an aggregate of at least 7,000Km across the country. It is estimated that Ethiopia has between 180 and 200 fish species, over a third of which are considered endemic.

More than 70pc of the fish produced in Ethiopia are harvested from Abaya, Chamo, Tana, Ziway and Awassa lakes. The rest are from dams such as Finchaa, Qoqa and Tekeze. While most of the fish come from Amhara, Oromia, Southern Nations, Nationalities, & Peoples' and Gambella regional states, tilapia, Nile perch and catfish are the most consumed species both in private and commercial settings.

The Ministry of Agriculture has also given attention to the industry, recently launching a study on the fish farming sector.

The finding of the study is expected to be launched on August 8, 2019, according to Gebre Egziabher G. Yohannes, state minister for Ministry of Agriculture in charge of livestock development.

He also says that the fishery industry has to transform into modern fish farming from a traditional one, which is harming the environment and depleting the fish reserve.

"Products from fisheries must be developed by breeding different fish species to supply quality fish products to the public," Gebre Egziabher said.

Alwin says that there is a shortage of fish feed in the market, forcing the company to rely on imports.

"If we can use all of our available water resources," said Dereje, "aquaculture can contribute to the development of the country’s economy through exports, as fish can be cultivated much quicker than other agricultural products."

He also says that the Amhara Livestock Resource Development & Promotion Agency has built a huge fish hatchery with an investment of 20 million Br to produce quality fish.

Regional Enterprise to Build Dam for 1.5b Br