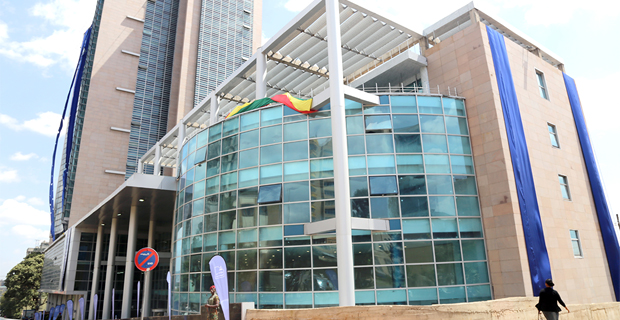 Dashen Bank, one of the leading private banks, has invested five million Birr to open a special branch inside its recently inaugurated headquarters.

Located on the ground floor of its headquarters, the branch has a capacity of hosting 15 people at once and has a self-service desk for those who want to use internet banking, account checking and send money transfers. The branch also has television screens installed that provide information on exchange rates from the international banking division.

There is a dedicated window for each segmented service without teller windows, which allows clients to interact with customer service officers without barriers in between.

“The new branch helps us to avoid unnecessary paperwork and increase work efficiency,” said Asefaw Alemu, CEO of the Bank.

The special branch is one part of the activities undertaken by the Bank to transform itself into one of the most competitive banks in Africa by 2025, according to Asefaw.

Dashen Bank hired KPMG Advisory Services Limited, a global advisory company, for strategy formulation and implementation in 2017 on a budget of 40 million Br.

The opening ceremony of the branch was held last Thursday, September 5, 2019, with the presence of Deputy Mayor Takele Uma and Abinet Gebremeskel, CEO of MIDROC Ethiopia’s Project Management Office.

During the inauguration ceremony of the branch, the Bank announced a one million Br donation for the Federal Police Commission's Crime Investigation Bureau and for the school feeding programme of Enat-Weg Charitable Association.

Dashen is also in the process of building a 900Sqm parking lot that can accommodate 120 cars behind its headquarters, which is located in front of National Bank of Ethiopia.

"As soon as we receive the necessary documents from the City Administration," Asfaw said, "we will start designing the project."

Three years ago, the Bank opened its first premium branch at Wollo Sefer with 30 employees. That branch has two floors, with the first for regular customers, while the second floor is designated for premium customers.

Eleven shareholders founded Dashen Bank with an initial capital of 14.9 million Br in September 1995. Upon receiving a license from the National Bank of Ethiopia, Dashen opened its doors for service in January 1996 with eleven branches.

In 2017/18 fiscal year, the Bank declared a 14pc increase in net profits of 904.3 million Br. At the same period, the salary and benefits expenses of the Bank also reached one billion Birr, a 35pc increase from the previous year, while administrative costs reached 587.3 million Br.

Currently, Dashen Bank has 9,000 employees, 6,000 of which are permanent. The Bank operates with 415 branches, 360 Automated Teller Machines (ATMs) and 870 point-of-sale systems across the country.

Habib Mohammed, a financial expert with a decade and a half of experience in the sector, sees the benefits of opening another premium branch.

“Segmenting customers will help the Bank and customers to avoid a dense crowd,” Habib said.

This practice should not be limited to the banking sector, and other public service sectors should implement this kind of service, because it increases the profit of the government and can give services to customers within a shorter period of time, Habib added.