The appointment of the vice governors faces strong backlash from experts 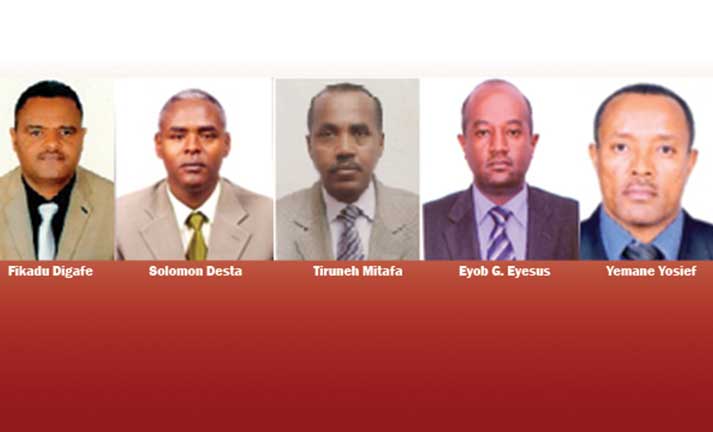 As part of the ongoing reform at the National Bank of Ethiopia (NBE), the board of the Bank appointed three new vice governors including a chief economist promoted from within the Bank.

Fikadu Digafe, Solomon Desta and Eyob G. Eyesus, who were working as directors at the central bank, were promoted to vice governors in charge of monetary stability, financial institutions and corporate services, respectively.

Fekadu, who was recently appointed as director of external economic analysis & international relations at the Bank, will be coordinating the research team as chief economist of the country. He has been involved in the different research work at the Bank, including for the quarterly publication of the central bank, Birritu.

The post was vacant for almost 10 months after the departure of Bekalu Zeleke, who joined Bank of Abyssinia having a brief stay at the Bank. Bekalu replaced the long-serving vice-governor Yohannes Ayalew (PhD), who was appointed to be executive director of the Ethiopian Development Research Institute in June 2018.

Solomon, who has been a director of bank supervision overseeing the regulation of financial institutions, replaced Tiruneh Mitafa. Tiruneh was appointed to the post four years ago after he retired from the Development Bank of Ethiopia (DBE), where he had served as vice president. Tiruneh replaced Getahun Nana, who moved to lead the state policy bank, DBE.

Eyob, who has been serving as director of the payment & settlements system directorate, was named vice governor for corporate services, replacing Yemane Yosief, who was appointed to the post in 2009 along with Yohannes and Getahun.

Early last week during a meeting held at the Ministry of Finance, Yinager Dessie (PhD), governor of the central bank, disclosed that the Bank is undergoing a major reform. The meeting was called to discuss the recently designed Homegrown Economic Reform Agenda with leaders of the financial institutions and economists.

The reform plan was developed by a team of experts from the central bank and the Ministry of Finance, in collaboration with the Office of the Prime Minister and the National Planning & Development Commission. The central bank is the primary implementer of this reform plan, which has been referred to by one international organisation executive as "ambitious but doable".

"The implementation requires new thinking, skill and knowledge," said Yinager, "so we're working on building our capacity and bringing new experts on board."

However, the new appointment of the vice governors has faced a strong backlash from economists.

"Considering the existing imbalances in the macroeconomy," said a senior advisor, who requested anonymity, "the appointees are not up to the task."

Alemayehu Geda (Prof.), a macroeconomist with two decades of experience, also says that the chief economist of a country should have a track record of publishing multiple comprehensive research papers about the country, continental or international economy, and this should be coupled with ample experience in the field.

"The appointment shows the extent to which the government is not serious toward the economy," he said.

Ethiopia needs a chief economist who will have a group of experienced economists that will regularly conduct assessments quarterly or biannually to come out with forecasts, comprehensive macroeconomic reports and economic models, according to Alemayehu.

The country should also take the experience of other countries that organised a Monetary Policy Committee, which comprises members from a government institution, the private sector and academia, according to Alemayehu.

The committee will be tasked with helping the government in advising on monetary policies that can solve the problems in the economy, according to Alemayehu.

The central bank, which rarely reshuffles top-level executives, got its current governor in June 2018 after Yinager succeeded Teklewold Atnafu, the longest-serving governor who remained in the post for almost two decades. Teklewold currently works as an advisor at the Office of the Prime Minister. He is also a member of the central board of directors, which is chaired by Girma Biru.