Located in Amhara Regional State, the projects are worth 2.2 billion Br 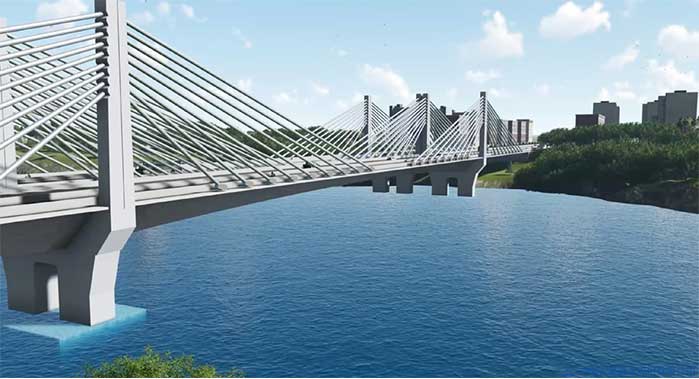 One of the projects involves the construction of a 380-metre-long bridge that connects Bahir Dar with Gonder at a cost of 1.4 billion Br.

The Ethiopian Roads Authority kicked off the construction of two mega road projects in the Amhara Regional State for 2.2 billion Br.

The projects were launched at the end of last week with the presence of Deputy Prime Minister Demeke Mekonnen, Minister of Transport Dagmawit Moges and Deputy President of Amhara Regional State Temesgen Tiruneh. Expected to be completed in three years, one of the projects is a road that connects Bahir Dar to Tis Esat, while the second one is a bridge over the Abay River.

Bahir Dar - Tis Esat Road, made of asphalt and concrete, extends 22.3Km and costs 767 million Br. Melcon Construction Plc, a local construction company, was hired for the project in July 2019.

Melcon, which was founded 18 years ago, constructed the Yeka-Ayat and the Melka Jebdu-Dire Dawa road projects at a cost of 130 million Br and 63.5 million Br, respectively. Melcon is also constructing a 4.5Km road that extends from Haile Garment to Jemo Square in the capital that costs 536 million Br.

The Authority is in the process of hiring a consulting firm that will supervise and consult Melcon on the project.

The road is expected to boost tourism as the new road will create better connecting routes from Bahir Dar to the Blue Nile falls, a prominent tourist destination. The road will also connect the area with Bahir Dar Industrial Park.

CCCC was awarded for the second project that involves the construction of a 380-metre-long bridge that connects Bahir Dar with Gonder at a cost of 1.4 billion Br. The bridge will be 43 metres in width and will have the capacity to accommodate a six-lane motorway, a bicycle path and a walkway.

Botek Bosporus Technical Consulting, a Turkish company, jointly with the local firm Stadia Engineering Works Consultant Plc, will supervise and consult on the construction of the bridge, which will replace the existing 60-year-old bridge.

"Due to long years of service," said Habtamu Tegegn, director general of ERA, "the bridge has deteriorated."

The existing bridge has been creating traffic congestion and fails to accommodate bicycles and pedestrians due to its 10-metre width, according to Habtamu.

In the same week the two projects were kicked off, the Authority inaugurated Bahir Dar-Zema Wonze-Feleg Birhan concrete asphalt road that was built at a cost of 2.5 billion Br. The road that decreases the traveling distance between Bahir Dar and Addis Abeba by 80Km is 175Km long and took five years for completion.

The construction of the road was undertaken in two phases. The first segment of the road, which is 92.5Km long, extends from Bahir Dar to Zema Wonze and was built by Sino Hydro Corporation, a Chinese company, while the local consulting firm Nate Consulting Energies supervised the project.

The second segment that connects Zema Wonze with Feleg Birhan covers 82.8Km. It was built at a cost of 1.2 billion Br. China Railway Construction Group (CRCG)  built the road with the supervision of Icon Engineering Plc, a local consulting firm.

Being one of the nation’s largest capital expenditures, road maintenance and construction cost the country 33.1 billion Br in the last fiscal year. The spending has shown a 2.4pc decline from the preceding year, which stood at 33.9 billion Br.

Experts in the area point to the significance of the road projects citing the low road density of the area.

“These road projects have been avoided for long due to the high cost they entail because of the topography of the areas,” said Melese Haile (PhD), a civil engineering lecturer at the Addis Abeba Institute of Technology's School of Civil & Environmental Engineering.

The country so far had focused on building roads that have a relatively low price tag, such as roads across plains, according to Melese.

“Many of the new roads to be constructed in the future will have very high costs, as they will be in the most difficult areas,” he added.