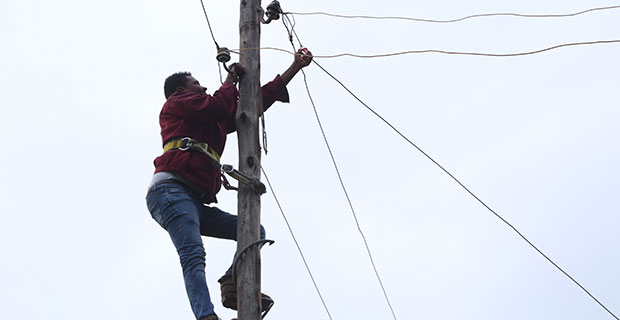 EEU is upgrading electric power distribution lines in six regional towns and the project is expected to be completed in 18 months.

One Indian and four Chinese firms have secured a project to upgrade electric power distribution lines in six regional towns at a cost of 80 million dollars.

Ethiopian Electric Utility awarded the companies with contracts to rehabilitate and upgrade 1,265.6Km of power distribution lines in Wolaita Sodo, Harar, Shashamane, Debre Marqos, Adigrat and Gonder with the tenders divided into three lots. The companies are expected to complete and deliver the project in 18 months.

For the first lot, which consists of the upgrading of power lines in Wolaita Sodo and Harar, two Chinese companies, HHCC and CICC, were awarded. For the second lot that will upgrade the electric power lines in Shashamane and Debre Marqos, Jiangsu Ettern, CICC and China Construction Civil Engineering (CCCE) secured the contract.

Larsen & Toubro, an Indian company which has engaged in the hydrocarbon, infrastructure, power and process industry sectors for over 30 countries, was awarded the power distribution line upgrading project of Adigrat and Gonder that were categorised under the third lot.

Out of the total budget, 70 million dollars of it will be covered by the World Bank, while the government will cover the remaining.

Three years ago, Ethiopian Electric Power conducted a feasibility study for the project. The study indicated that the project would give access to electric power to 150,000 households.

Failure of the existing power lines in meeting the demand from the six towns has triggered the upgrading project, according to Melaku Taye, corporate communications director at EEU.

"Population size and urbanisation levels of these towns were the criteria in selecting them," said Melaku. "The project will minimise power outages in these cities."

Tigabu Atalo, an electrical engineer working on energy and power infrastructure projects, was impressed by the project.

“Upgrading the transmission lines is necessary not only to meet the current demand but also to respond to the growing demand for electric power,” Tigabu told Fortune.

Much electric power is wasted during distribution, because the distribution lines are old, according to Tigabu.

In Ethiopia, the demand for electric power increases by 13pc yearly, and the electricity coverage of the nation has reached 58pc. The current power supply comes from the generated 4,300MW of electric power from hydropower, wind and geothermal sources.

The country is generating the power mentioned above while having a potential of producing over 1.4 million megawatts of electricity from hydroelectric, solar, geothermal and wind sources.

Currently, 58,000 households are waiting to get electric service in the country.

EEU is upgrading electric power distribution lines in six regional towns and the project is expected to be completed in 18 months.

Ethiopia Needs $40b to Pursue 71 Power Projects in Decade