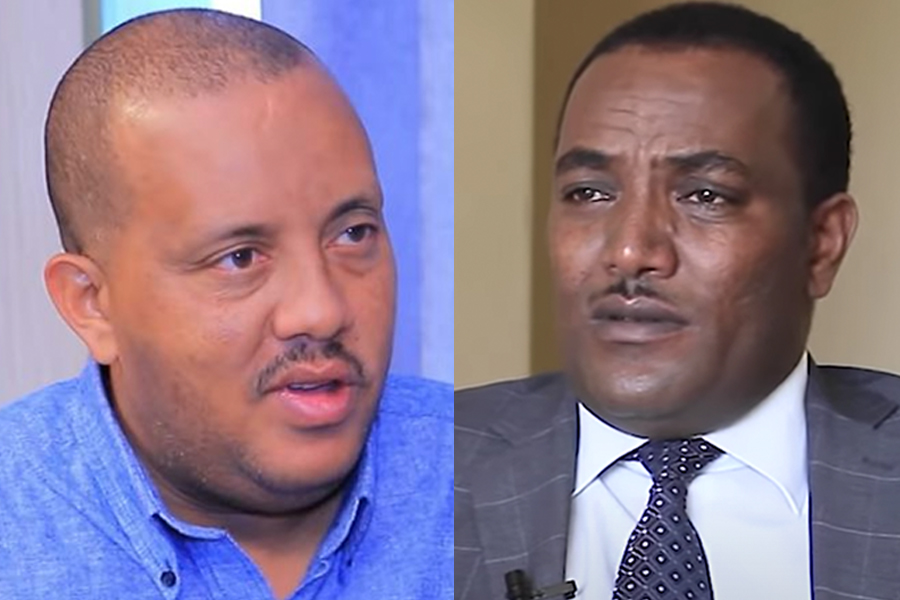 Getachew Reda, a political bureau member of the TPLF and Awelu Abdu, head of Public & Foreign Relations of the Prosperity Party.

The Tigray People's Liberation Front (TPLF) has called for a separate entity to be created through a new political pact to steer clear of the looming deadlock over the conduct of the upcoming national elections. This is in sharp contrast to the direction the federal government has taken, seeking a constitutional interpretation of the clause that concerns the polling schedule.

In a statement issued yesterday, the TPLF declared that the Prosperity Party (PP) has no legitimacy to hold elections and proposed the establishment of a 'political entity' that will be composed of members from different political parties and will be tasked with overseeing the election process.

"We'd like to see another political arrangement that would oversee this,” Getachew Reda, a political bureau member of the TPLF, told Fortune.

This is not a proposition those in charge of the incumbent party are willing to digest, showing that both are heading to a standoff.

A five-point statement, issued after a three-day meeting of the political bureau of the TPLF held between May 1 and 3, 2020, also called for a national dialogue and highlighted its determination to hold regional elections if elections are postponed outside of the constitutional framework. The party called the move to postpone elections on the grounds of fighting Novel Coronavirus (COVID-19) the final act in undermining the constitutional order. For the TPLF, the outbreak of COVID-19 is an "excuse rather than a cause for postponing the elections."

The TPLF questioned the powers of the House of Federation to interpret the Constitution as an instrument "used to prolong the term in office" of the incumbent political party.

"The responsibility of the House is to clarify constitutional provisions and not to rewrite them," said the statement.

“We still can work on a deferred election but it can only be done within the framework of the Constitution,” Getachew said.

A potential constitutional solution would be to dissolve the parliament and hold elections in the coming six months, according to Getachew. The TPLF also called into question the legitimacy of the Prosperity Party, warning that the incumbent party will bring Ethiopia to the brink of disaster after October 3, 2020.

Awelu Abdu, head of Public & Foreign Relations of the Prosperity Party, strongly challenged this assertion. He argues that PP is a legitimate governing party since the EPRDF was laid to rest according to the provisions of its by-laws.

"All the rights and responsibilities of the Front have been transferred to the Prosperity Party, legally," Awelu told Fortune.

He believes that there is still a gap in the Constitution concerning electoral business.

"It isn't a crisis and the appropriate legal entities are handling this accordingly," Awelu said. "Any question of dealing with this outside of the legal framework is an attempt to grab power unconstitutionally and is being done by bodies that know they have no chance at the polls."

The TPLF says it wants to play its part to halt this crisis, but warned, "it is not willing to throw away any constitutional rights of the people of Tigray to govern themselves."

The statement says that the TPLF is prepared to hold elections at a regional level "in a manner that safeguards the constitutional rights of the people of Tigray and taking preventive measure against COVID-19."

“Tigray has an inalienable right to self-governance and it’s not going to be sacrificed on the altar of bureaucratic expediency," said Getachew, while addressing the constitutional framework that would allow the regional state to hold elections at a regional level.

The EPRDF Executive Committee...
News Analysis
RULE OF LAW: WHERE A STATE CAN NEVER FAIL (LESSON X)
News Analysis
TAXES: A SMALL PIE CAN ONLY GIVE SO MUCH (LESSON IX)
Fortune News
Ethiopia Kicks off Large-Scale Rice Production
Fortune News
Smallholder Farmers Join Hands to Boost Productivity
Massive Protest Drains Food Supply
What Internet Shutdowns Say About the State
Violence Turns Investments in Regional Towns into Ash
Affront Against the People
Where Did it all Go Wrong? Lessons from History
Lack of Long Game, Achilles Heel of Ethiopia's Politics