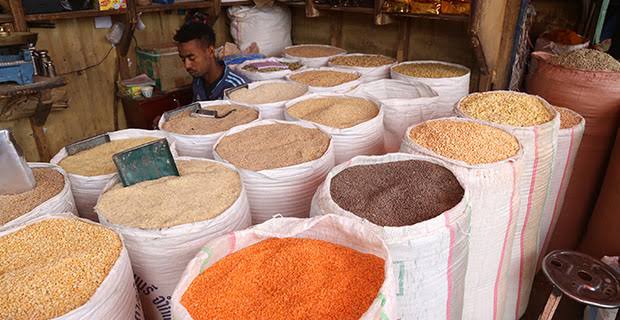 Last month's inflation rate showed a 0.7 percentage point spike from the preceding month, which was 17.9pc, according to the latest consumer price index released by the Central Statistical Agency (CSA).

The frequent holiday festivals and the advent of a new school year pushed the headline inflation rate to a five-year high in September.

Headline inflation, an indicator of the cost of living, reached 18.6pc last month, becoming the highest rate since 2014 when  the rate went as high as 22.2pc.

Last month's inflation rate showed a 0.7 percentage point spike from the preceding month, which was 17.9pc, according to the latest consumer price index released by the Central Statistical Agency (CSA).

The increase was mainly driven by a surge in food inflation, which reached 23.1pc, while non-food inflation has also surged to 13.1pc.

The Agency attributed the two major holidays, New Year and Mesqel, as the cause for the rate increase.

"September is the beginning of Ethiopian New Year with frequent festivals that usually result in the rise of seasonal inflation," reads the report from the Agency.

In the reported period, price increases in major cereal types such as teff, barley, sorghum, maize and wheat flour were observed in the stated period, according to the report, which also adds that vegetables consumed daily such as tomatoes, onions and garlic showed a slight rise.

Price increases for clothing and footwear, house rent, housing repair and maintenance, energy, household goods and furnishings, health care and automobiles attributed to the jump in the non-food inflation rate, according to CSA.

Though the Agency claims that last month witnessed seasonal inflation, Alemayehu Geda (Prof.), a university lecturer and macroeconomist, argues that the rate increase is a result of fundamental problems in the economy.

Low agricultural productivity and the high rate of urban migration are the root causes that are pushing the inflation rate higher, according to Alemayehu.

"The preceding month's rate, traders' monopoly power on products and services and consumers' expectations [that] prices may increase, are additional causes," he told Fortune.

The administration of Prime Minister Abiy Ahmed (PhD) also believes that the expansionary fiscal policy appears to have crowded out the private sector’s access to finance and contributed to high inflation.

Inflation averaged about 15.5pc for the past decade and a half.

Anticompetitive prices and hoarding practises make it difficult to stabilise the inflation rate, according to Eyob Tekalign (PhD), state minister for Finance, who met the leaders of financial institutions and economists early last week to discuss the latest economic reform agenda conveniently characterised as "homegrown".

The reform agenda, which is expected to be implemented over three years, aims to push down inflationary pressure along with creating jobs, addressing the foreign currency crunch, reducing debt stress and addressing access to credit.

However, the macroeconomist forecasts that the rate would not go down until next December, which is known as harvesting season.

"Even after the harvest season, the figure wouldn't go down if agricultural productivity is not as expected," he said.

To push down the inflationary pressure, Alemayehu has long and short term recommendations.

In the short term, Alemayehu recommends the government promote local production of wheat and edible oil in a bid to stabilise the market and control the rate from further increasing along with investing in small scale farmers to double production by providing them with improved seeds and promoting irrigation farming.

As a long term solution, Alemayehu suggests the government work on capacity building at the government institutions [National Bank, Planning & Development Commission and Finance Ministry] that work on the economy, by bringing qualified and educated professionals on board.

Headline Inflation Clocks In at 34.2pc

How to Turn Food Inflation into Food Shortage

Address Inflation Before It Breaks the Economy's back

How to Fuel Inflation, then Harm the Environment

All rise: Actions to take now to counter inflation
Share this...